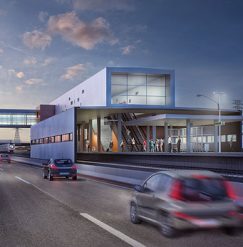 QTM Engineering developed over 485 RTM reviewed Traffic Control Diagrams and various Traffic Management Plans for the project. QTM Engineering were also involved in the designing of road safety barrier schemes and have also conducted a Traffic Impact Study for the major freeway closures and a visual survey of the detour routes for existing closures to ensure that network assets are not affected by increased traffic volumes. QTM Traffic Management installed the required schemes including freeway on and offramp closures, non-concurrent freeway carriageway closures and various lane closures, works off road, pedestrian management and have manually controlled signalised intersections during times where QTM Electrical have been engaged to undertake modifications to the traffic signals at the Russell Road interchange. Much of the works have also required QTM Traffic Management to operate a Truck Mounted Attenuator where works have impacted on the Kwinana Freeway. In June 2016, a complete and major closure of the Kwinana Freeway took place over three weekends to allow crane lifts for the Russell Road duplicate bridge amongst other works around the new station. QTM Engineering and QTM Traffic Management extensively planned for these closures which ensured that the closures were managed in such a way as to limit the impact on the road network as much as possible.

Prior to the award of the project to Georgiou, QTM Engineering also assisted with pre-award planning which assisted in the ability for the project to commence as soon as possible after award.

The project has evidenced how QTM can provide a vast array of services in the fields of traffic engineering, traffic control, traffic management planning, traffic signals and street lighting to a single project, and work together to ensure efficiency gains for the project.

For more information on the project, please visit the Public Transport Authority website at PTA_Aubin-Grove-Station