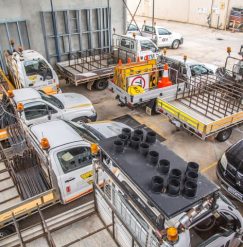 Commercial and industrial sites are road authorities for their internal private road network.

They have a duty of care in the discharge of the function and responsibilities as a road authority.  Where the section of their site is open to the general public there is a need to be in general compliance to the standards in construction, signage and delineation delivered in the public road network.

The section with restricted access relies on traffic engineering aligned with the Hierarchy of Hazard Control Framework.  In the restricted access area, whilst the site occupier (road authority) has more control, the traffic management task can also be more challenging due to the need to manage interactions between light vehicles, heavy vehicles, mobile plant (forklifts, skid steers, loaders (wheeled and tracked), site-only dump trucks (rigid and articulated), internal transfer vehicles and water tankers), pedestrians and sometimes cyclists (some large industrial sites use bicycles as a mode of transport within site).

Hierarchy of Hazard Control Framework consists of the following: control elements, brief description and effectiveness.  This concept is expanded in the following table.

This is best illustrated in a recent case study.

QTM was engaged by a commercial site owner via its managing agent to undertake traffic investigations and provide possible solutions to an ongoing traffic management issue.

One part of the large commercial estate was repurposed into a service centre by a public sector tenant.  The change of use triggered a change in the traffic generation and movement patterns at this quadrant of the site.  The service centre is accessed via two approaches:

Inputs were sought from the occupiers and their staff on the possible configuration of the revised road way layout.  A draft sketch based on the inputs was prepared and circulated for feedback and consultation from the relevant stakeholders.

With general consensus reached, the plan was implemented with improved clarity for loading, pedestrian movement and vehicle circulation.